In my last play-through, I made a huge mistake of not keeping my army up to date. I went with defending cities with one Legion unit. Some cities had Pikeman units, and others had ancient Warrior units guarding them. This happened because I was taking a pacifist approach to the game. I was trying to win the game through religious victory. To win with a religious victory, you have to convert all other civilizations to your religion. You don't have to capture or invade cities belonging to other civilizations. So, my army was only for defense. I never started any wars against other civilizations. After clearing out the barbarians on my home continent, I let my guard down. I didn't notice that Japan, my next-door neighbor, was amassing Samurai units beyond my borders. Their target was my capital city of Rome.

My Legion, Pikeman and ancient Warrior units were no match for the Japanese Samurai units. Those Samurai units descended in droves. In a few turns, the Samurai units surrounded my city of Rome. To fight off the enemy units, I had to rush production of Knight units. They were my strongest available melee unit then. Rushing production means paying for them in gold. It is an expensive way to build an army for counterattacks. It could work in a pinch, if you have a lot of gold that is. But maintaining a group of defenders is a better strategy going forward. Upgrading defender units when needed could work too. But some units cannot be upgraded past a certain point. For example, not all the units I had could be upgraded into a Knight. So, it still pays to keep your defending army up to date by building modern units when you can. Thankfully, I was able to defend Rome long enough for Japan to call off the war.

One thing that I confirmed was how good Archer units are as city defenders. Because they can shoot from range, they don't need to get out of the city to attack enemy units. They can stay inside and rain arrows down on the enemy. Another thing I learned is that I can perform a kind of “hit and run” attacks on enemy units. This is after grouping Knight units into a platoon. As a group, they can take more damage. And when they need to retreat, they can get away quickly because they are on horses. Lastly, building walls around a city can help in delaying the capture of your city. Sometimes, that's all you need to get your counter-attacking units in place to drive off the enemy.

Anyway, I kept at it. This time around, I kept my defending army updated with modern units to stave off future attacks. I converted Japan, then Greece, then Macedon to my religion. Russia and Scythia were the last two civilizations that needed to be converted. Russia put up a good fight. It didn't help that my Apostle and Missionary units had to cross oceans to get where they needed to be.

If you're wondering what kind of battles Apostles and Missionary units engage in, the game calls it “Theological Combat.” It is a different form of combat, not like military warfare. In fact, the Apostle, Missionary and Inquisitor units do not even count as military units.

After I converted Russia to following my religion, it didn't take long for Scythia to fall. And then I won my first ever game of Civilization 6 on the Xbox One. 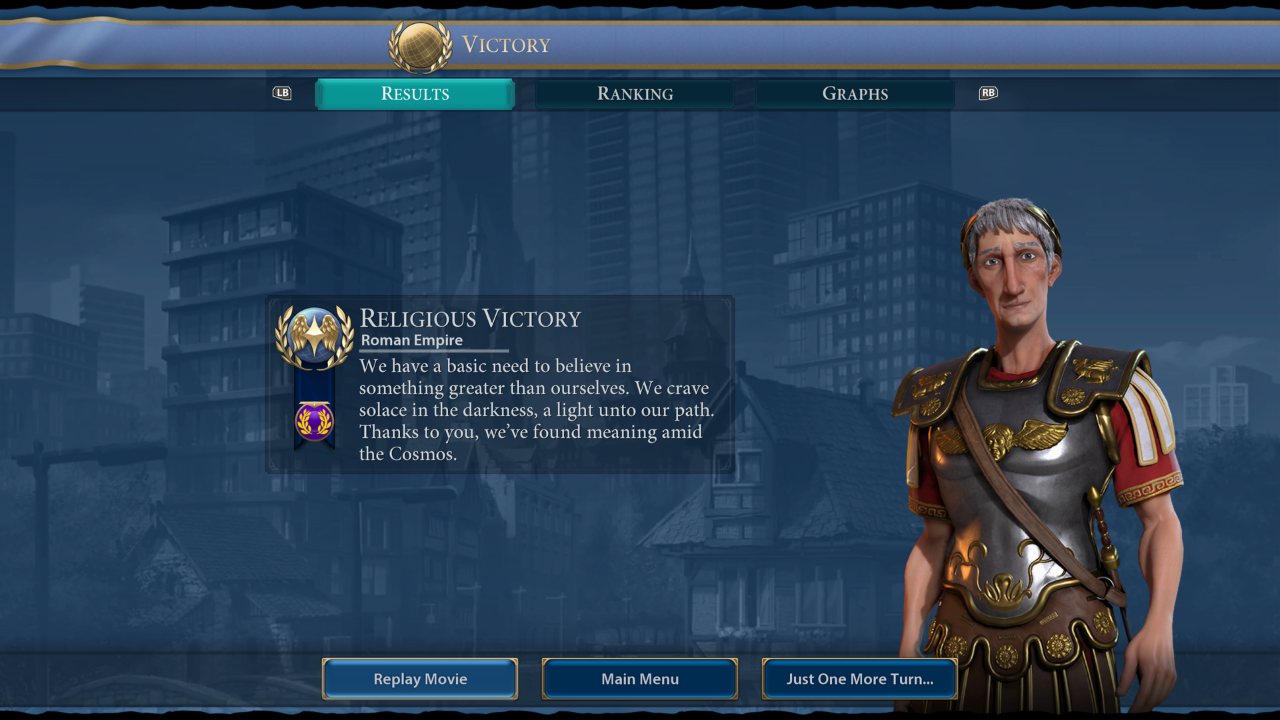 Might be some minor spoilers to some, but this video shows the last turn that lead to my win. It also shows the end game cinematic for a religious victory in Civilization 6.