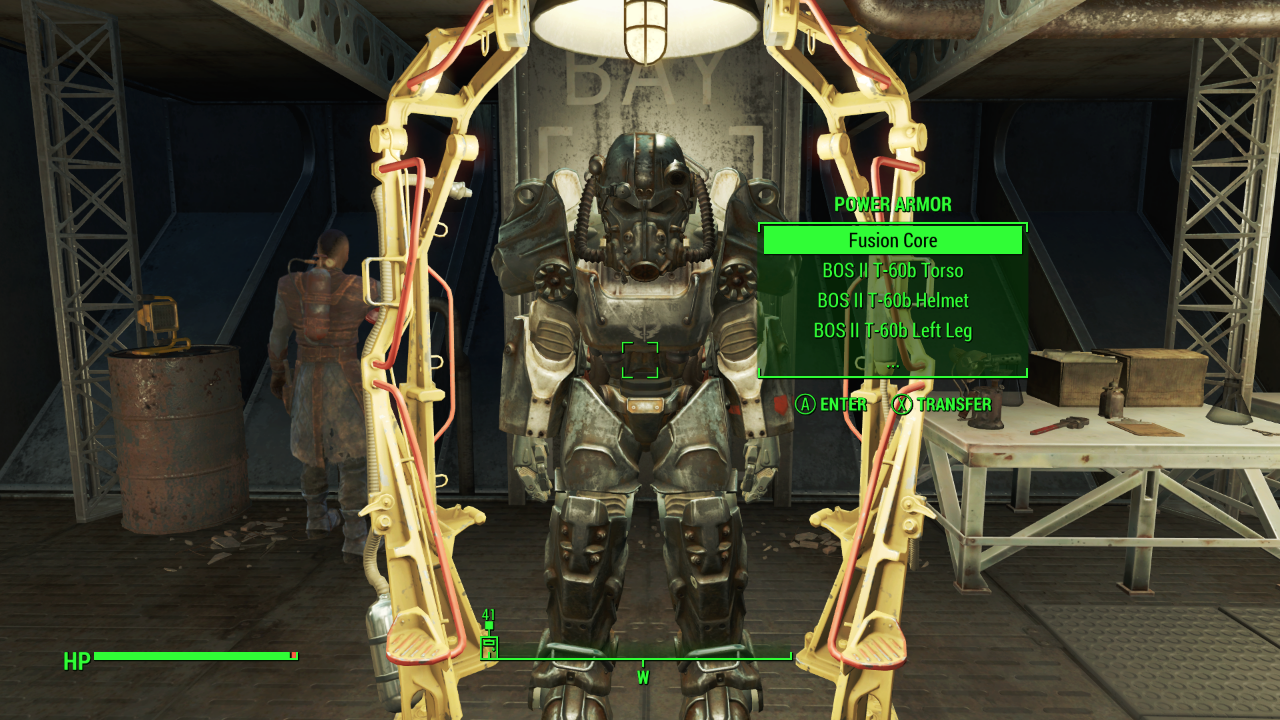 One of the easiest ways to get decent Power Armor in Fallout 4, is to join the Brotherhood of Steel.

I finished another “Set up MILA” quest for Tinker Tom, this time it was at some Fish Packing Plant center. Reported back to him and he gave me another location to go to. Jeez will this quest line even end? He is almost as bad as Preston now, giving out never ending settlement quests.

I spoke to PAM and I got a quest to establish Jamaica Plains as a settlement. I’ve already discovered the location in the past but could not figure out how to make it a settlement of mine. Well now I know. I also managed to discover the “Treasures of Jamaica Plains”. I won’t spoil what’s inside except for one. If you play a melee character, there is a legendary baseball bat in there.

A new settler showed up on The Castle. I sent him to the County Crossing settlement. This event disproves my theory from my previous log where I said I already hit the population limit on my settlement, which prevented new settlers from showing up. That obviously isn’t true and something else is at play here. Either way I’m just glad to get new settlers.

Completed the “Set up MILA” quest at Mass Bay Medical Center. Was expecting some heavy resistance at the rooftop, but didn't get any. Actually there were no enemies until I'd gone down the building after completing the quest.

I ran into the classic issue of being “encumbered” because of too much loot. What can I say, I like looting enemies. Since I had Hancock as my companion, I was hesitant to call a Brotherhood of Steel Vertibird for a lift as I was worried that they might attack him (since he is a ghoul). So I had to walk around encumbered for a good amount of time until I found a location I can “fast travel” to. Dumped the extra loot at a nearby trash bin, then had to go back and forth to merchants and my loot until I was able to sell or save all of it.

I reported back to Tinker Tom at the Railroad HQ, who then gave me another location to set up MILA, at the Corvega Assembly Plant. Learning from my previous mistake of having too much loot at the end of the quest, I made sure to prepare for this one. I outfitted Hancock in Dirty Armor Fatigues with a set of “Deep Pocketed” Polymer Combat Armor. That would allow him to carry more loot than usual. And I did the quest using a Brotherhood of Steel Power Armor with calibrated leg pieces for extra loot carrying capacity. That quest was pretty straightforward and I didn't experience any issues with regards to enemies or hauling back the loot.

In the process of doing another of the “Set up MILA” quest for the Railroad. The current one is located in Mass Bay Medical Center.

Stopped playing at this point. Need to explore the building more.

On my previous log I mentioned that I activated the recruitment radio beacon on The Castle settlement. For some reason no new settlers showed up. I need to figure out why.

After reading through the list of Fallout 4 terminal entries, I guess it was unavoidable that I would get the urge to play it again. I picked up where I left off, trying to finish the Silver Shroud quest line.

I now remember why I stopped playing this game; I was trying to save Kent but I kept failing. I decided that for this play-through, I would just accept that I cannot save him and move on.

To fully complete the quest line, you have to talk to Hancock at the end. If you've already had the conversation where Hancock wants to be your companion, you might have a hard time triggering the talk to finish the Silver Shroud quest. What worked was to have Hancock be my travel companion, then talk to him.